Of course, Balblair is infamous for releasing all its whiskies in vintages that get fairly confusing as they release vintages multiple times. This one is...a 1990, second release, bottled in 2016. There was a previous second release, bottled in 2015. So...big vintage, released twice? Heard that the 2013 bottling tasted very different (and much inferior) to the 2016 one. Then there are other reviews that claimed otherwise...Haven't tasted the 2013, and my previous Balblair experience wasn't great, but I went with the recommendation of Khai at LMDW and got this (after he let me try it). Some reviewer said that this is a whisky to reward yourself with, and so it was for me, paying for it using what I got as a performance bonus from work done the year before...Oh, this was purchased last year, but only just opened to celebrate the Lunar New Year! 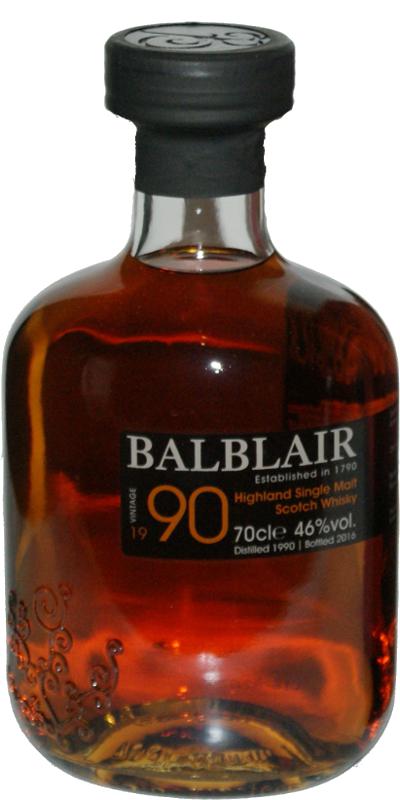 Colour -  looks reddish in the bottle, gold in the glass.

Nose - There's a strong malt backing in this. Whisky, for sure. What hits you first is how oily it smells. Musk melon, butter, some salt and kelp. Then, lots of red fruits, and perhaps a bit of tannin, like a French wine. Looking at prunes and dried cranberries. That turns nutty, with a hint of some flower too. Very vibrant nose.

Palate: Cranberries, Raspberries, cherry tomatoes, honeydew, smoke and the taste of sand by the beach. There's quite a bit of spices as well - cloves, cinnamon. Caramelized sugar. This is sweetened fruit juice! Like those packet fruit juices that swear that there's no sugar added. Except of course, there's this rich, buttery, salty side as well.

Finish - Very warming, and stays with you for a looooong time. Menthol, light, gentle smoke, mm. Spices are coming out now. Cloves and cumin. Some drops of fruit juice still. Mixed with some saline solution. Wow. Sweet and slightly salty to the end...where a whiff of smoke comes back up.

Overall - bonus marks for that beautiful bottle. This was great. Fairly pricey, at about $280, but beautiful, aged perfectly. At 26 years old when bottled, this is the oldest whisky I've bought in terms of cask ageing (the Talisker 25 from 2007 is, of course, older). Honestly, feels like it's bang for buck, despite its premium price.
Posted by qi xiang at 7:20:00 AM No comments:

Email ThisBlogThis!Share to TwitterShare to FacebookShare to Pinterest
Labels: Balblair

Whisky of the (Previous) Year

I am about 427 years late, but here's some comments on the Whisky Exchange's Whisky of the Year 2018 - Bowmore 15 Darkest. Not sure if "Darkest" is honest marketing. 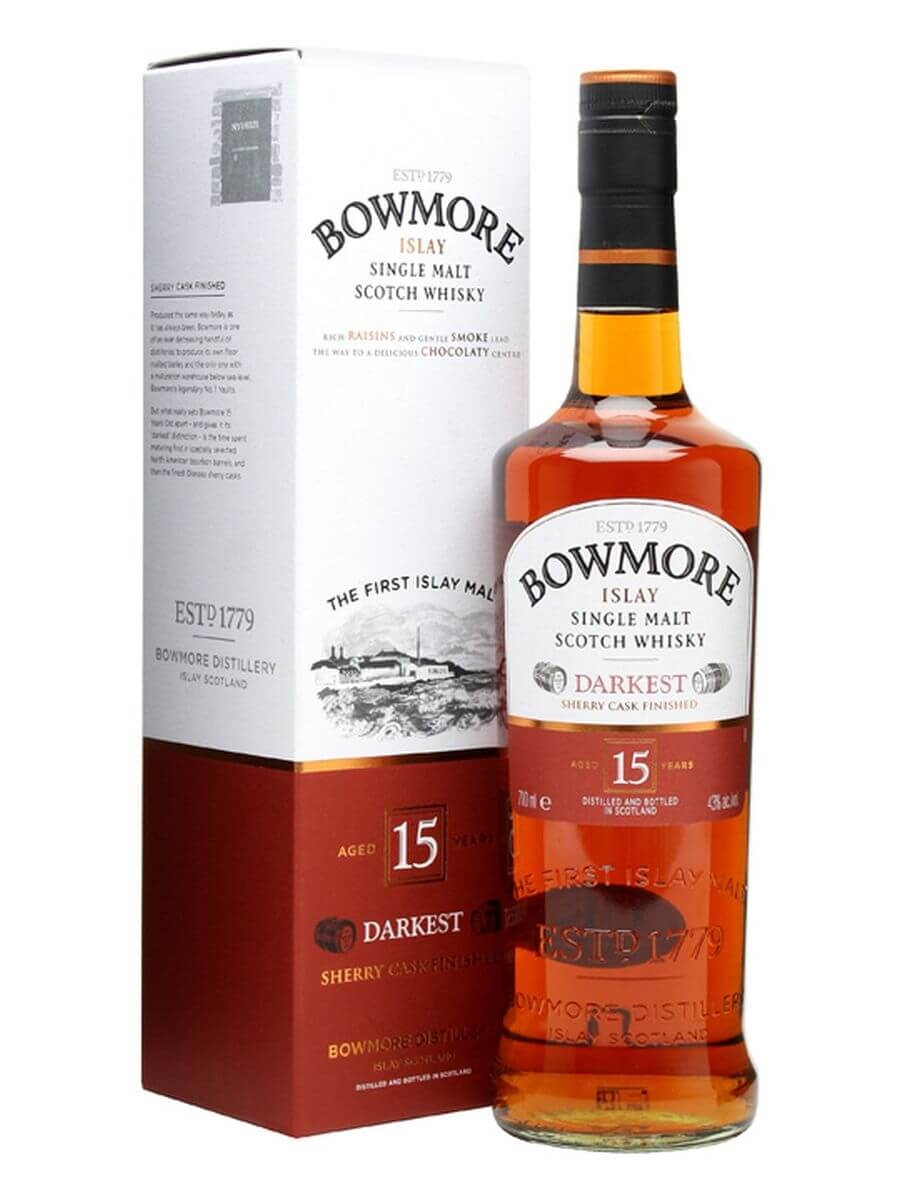 Nose - Oysters and brine. Red wine, and probably due to recency, I'll say a Shiraz. Quite a bit of oak tannin, but there's also some sourdough bread. There's peat for sure, though that blends quite nicely with the oak and wine. Sherry comes across as prunes, the kind that comes in a tin (and gives my mom diarrhoea). Smoke, but

Palate - Sherry sweetness and dark chocolate. Not quite the darkest dark chocolate, but it's got that bitter cocoa edge. Vegetal and malty. The peat is pretty heavy, surprisingly. The alcohol stings a little, to my disappointment. There's a fairly hefty fruity layer too - prunes, dates, figs, and something that feels like...grapefruit, but maybe less sharp.

Finish - I like this! Fairly long and menthol notes are pretty strong, making it a good, refreshing swallow. Like having a mint, almost. Some bitterness, like an over-steeped kopi-o.

Overall - Really good bang for buck, which is exactly The Whisky Exchange's criteria for the "Whisky of the Year".
Posted by qi xiang at 7:23:00 AM No comments:

Email ThisBlogThis!Share to TwitterShare to FacebookShare to Pinterest
Labels: Bowmore

To South Asia for this review, and we're going to take a look at Amrut Portonova. Big, big whisky. Deep colour, high alcohol strength, port finishing... This whisky takes no prisoners - you're going to either love it, or absolutely hate it.


Colour - While the port finishing time period can't have been very long, this whisky is fairly dark. Probably the equal of any sherry cask matured 12 year old Scotch.

Nose - Creamy, prunes, grapes, vanilla. This is a sweet, fragrant nose that manages to punch you yet remain subtle. The high abv is to blame, partially, but that helps to deliver some of the subtler notes - menthol, a slight sharpness, like pineapples, and a little grist. Spicy, probably, but it's hard to tell amidst the high abv. With water - tones down the sharpness of the alcohol, giving it more roundness and bumping up the spicy side, but largely remains the same nose.

Palate - The high abv kicks you, but that kick delivers an explosion of flavour. Like hitting a pinata really hard (which is sort of the point of hitting pinatas. But never mind). You can almost feel the whisky evaporate, and the tasty vapours that emerge carry lots of grapes, prunes, and other flavours you associate with good red wines. Some vanilla and honey...maybe toffee...ok. This needs some water. With water - there, calm down. I probably only added enough water to bring it down to...50%. That's really crazy high abv. Same flavour profile, but more vanilla, toffee, lots of cinnamon and cloves, maybe a bay leaf too.

Finish - Long. This stays with you. Ginger, pepper, honey. Then lots of fruits. Grapes, and a return of something like pineapple. With water - drags out the finish, and introduces more obvious oakiness.

Overall - I brought this to a gathering, and in the whatsapp chat, people were offering bottles to share. First volunteer offered an aged Jack Daniel's. Second offered to bring an exciting 21 year old. Someone else offered to bring something even younger and tastier. Then I offered to bring something Indian. First response from the group was that the whisky night was not about who could bring the worst whisky. Meant as a joke of course, but somewhat shows that Singapore isn't really aware of the great Indian whiskies from Amrut and Paul John. This was really, really good. A little pricey though, at slightly below $200. Of course, I brought it to a gathering where the most vocal people were, well, Indians.
Posted by qi xiang at 9:02:00 AM No comments: